The Russia World Cup will get underway in two weeks’ time with the hosts taking on Saudi Arabia on June 14 and the Bitcoin price could be in for a boost as football fans descend on the country.

Digital payments in Russia have become fraught in recent years, with US payment giants Visa and MasterCard blocking credit card services to some Russian bank customers as a result of US sanctions back in 2014.

While the pair have since developed a way around the sanctions (and today process some 90% of all transactions in the country) there is still plenty of friction when it comes to digital payments. Last year Visa and MasterCard were blocked from Fintech, the Russian centre for new financial technology as the Kremlin works on its own domestic payment system, Mir.

Now some have turned to Bitcoin and cryptocurrencies to pay their way to the Russia World Cup (interestingly, you were able to bet on the 2014 Brazil World Cup using Bitcoin).

It was revealed in May some hotels in the Russia city of Kaliningrad — which will be playing host to some of the tournament’s games — were accepting Bitcoin as payment while some airlines and travel agents, as well as bars will be taking the cryptocurrency.

The use of Bitcoin as a means of exchange is something the cryptocurrency has been struggling with since fees for sending Bitcoin spiked in December.

Thorsten Koeppl, professor of economics at Queen’s University in Canada, previously said: “The value of Bitcoin is partly driven by its potential as a payments tool and, before the fees rose along with the price, there were people using Bitcoin for international transfers. This has become more expensive to do now. But the price is still being supported.”

As Bitcoin is increasingly used as a means of exchange, its utility will rise and demand along with it, pushing up the Bitcoin price — along with other cryptocurrencies being used for transactions.

The Bitcoin price has struggled in 2018 after reach giddy heights of almost $19,000 late last year. Bitcoin, along with many other major cryptocurrencies, have slumped in recent weeks — and investors are worried this downward trend will continue. 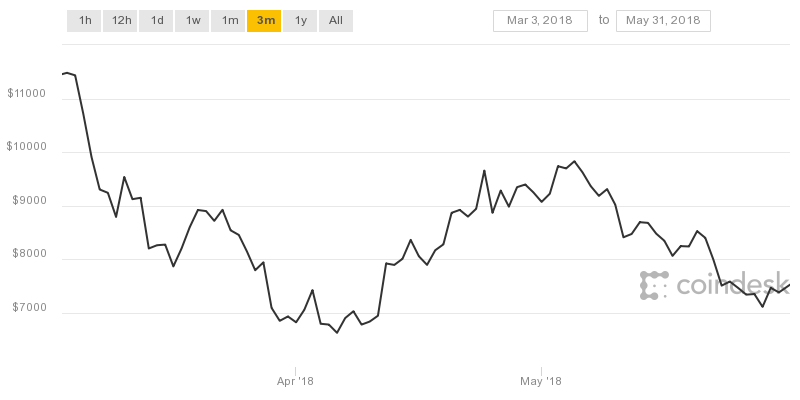 Many thought New York’s Blockchain Week in May — which included the mammoth Consensus conference — would spark a bull run but that failed to materialise and some are now looking towards the next Bitcoin halvening event, in just under two year’s time, as the next boom-time trigger.