Apple’s annual iPhone launch event has become something you can organise your calendar around, like Christmas or the half-term holidays – every September, usually early in the month, Apple CEO Tim Cook takes to the stage to introduce the year’s new iPhones.
This September should be no different and we’ve already heard plenty of rumour and counter-rumour from the secretive Apple supply chain, suggesting that 2017’s event – ten years after the first iPhone launched – is going to be special in more ways than one.
Launched: the iPhone 7 and the iPhone 7 Plus

Hey remember September 2016? Crazy times, right? The iPhone 7 and the iPhone 7 Plus were launched after months of build-up, and the general consensus was that Apple had another hit on its hands, even if most of the upgrades were minor ones.
A lot of the discussion at the time focused around what Apple had taken away – namely that 3.5mm audio jack – but several months on the move doesn’t seem quite as controversial as it did originally.
Compared with the 2015 versions (don’t worry, we will get to this year’s models shortly), the iPhone 7 and iPhone 7 Plus had similar designs but extra dust and water resistance, better displays, and faster internal components. The iPhone 7 Plus also introduced a dual-lens camera to an iPhone for the first time.
All of which leads us to believe Apple could have something major in store for 2017, because the 2016 upgrades were largely behind-the-scenes ones, and the use of the “S” doesn’t seem to indicate a minor upgrade any more… just don’t be holding your breath for a return of the headphone jack.
Rumoured: the iPhone 7S and the iPhone 7S Plus 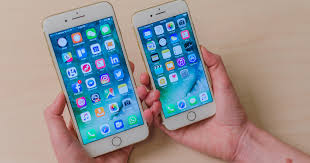 Let’s turn our attention to this year’s flagships, and there have been an avalanche of rumours so far about what we can expect.
The most significant of these are that the display technology will switch to OLED from LCD, that the Touch ID button will be moved to the back, and that the resolution of both the iPhone 7S and the iPhone 7S Plus will get a bump (they’re certainly due one).
We’ve also heard talk of True Tone displays, so the colours change depending on the ambient conditions, and we can certainly believe that’s on the way – especially as it’s already built into the 9.7-inch iPad Pro.
Aside from that, plenty of sources say Apple is preparing to shrink down the iPhone bezels, following the path set by LG and Samsung, and you can pretty much guarantee the usual improvements in phone speed, graphics performance, and camera quality.
Two handsets then that will look distinctly different to and significantly outpace their predecessors… but they might both be overshadowed by what Apple is said to have in store for the iPhone 8, launched alongside the iPhone 7S and the iPhone 7S Plus.
Rumoured: the iPhone 8

It’s been tricky to keep track of the rumours this year, not least because there are apparently three new phones on the way, not just two – and no one’s sure about the differences between them.
Most signs seem to point to an iPhone 8 – or an iPhone 7S Pro – appearing alongside the two “standard” iPhones with premium parts, a premium price, and probably a longer wait until you could order one too.
According to the rumour mill, the iPhone 8 will be coming with a curved, OLED screen, a sleek 5.8-inch edge-to-edge screen, a higher-than-QHD resolution, 3GB of RAM and two batteries to keep everything powered until the end of the day.
The Touch ID button and the front-facing camera will be completely integrated into the display, and Apple is going to throw wireless charging in as well, as it celebrates the 10th anniversary of the original iPhone in real style.
Meanwhile some tipsters say all three iPhone models this year are going to come with glass backs in a style we haven’t seen since the days of the iPhone 4S.
What you should expect in September

Right now there’s a lot of confusion about what Apple has planned for September: specifically regarding how many iPhones we might see, and what they might be called. We’ve gone for the most consistently repeated rumours, namely that two minor upgrades will be joined by a major one in the same year.
That sort of makes sense if you think about it – if Apple wants to celebrate ten years since the first iPhone with a humdinger of a device, it’s likely to cost a lot of money, and it won’t want to leave its more budget-conscious fans in the cold (not that iPhones are particularly cheap, but you get the idea).
None of this is certain yet though, and we suspect that certain rumours have been attached to the wrong iPhone model and may even relate to the 2018 iPhones.
This we can say for sure: Apple’s September 2017 event will definitely be worth keeping tabs on, and as usual we’ll be bringing you all the announcements as they happen.
In the meantime, you might want to start saving – it sounds like there are going to be some very impressive iPhones on sale later in the year, taking Apple’s iconic handset to even greater heights.